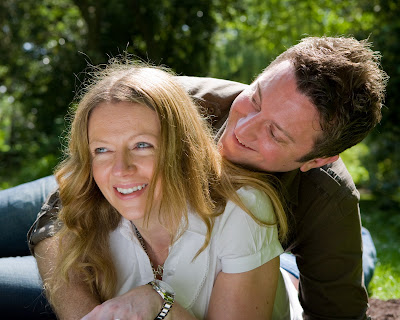 A couple of weekends ago I had the pleasure of shooting some pre wedding portraits with Victoria and Matt whose wedding I am shooting in about 3 weeks time. They have chosen the famous gastronomic Le Manoir aux Quat’Saisons in the leafy Oxfordshire village of Great Milton. A bit of background on this special venue…the hotel/restaurant is owned by the famous chef Raymond Blanc O.B.E. The modern French menu at the two-Michelin starred Le Manoir aux Quat‘ Saisons has been described as ‘a twist of imaginative genius’ and the cuisine is undoubtedly the focus of every guest’s visit. Gary Jones, a Blanc protégé and Michelin starred chef himself, rejoined forces with Raymond as Executive Head Chef in August 1999.The two-acre kitchen garden produces 90 types of vegetable and over 70 varieties of herb, all of which are used in Le Manoir’s kitchen. Monsieur Blanc has been a champion of the organic movement for the last 20 years.
On the Sunday we did the shoot the weather was fabulous and the lavender drifts were just starting to bloom and smelled amazing. As I had not shot a wedding there before (but I have now several booked!) I wanted to have a good look around the gardens. There is a 17th century pool where we took some lovely shots on the old steps there and then wandered into the Japanese tea garden complete with little bridges over pools. We had a ball, the pictures were terrific and Victoria & Matt were obviously having as much fun as I was. I am now really looking forward to shooting the wedding there in a couple of weeks and here is the best bit, Raymond, sorry Monsieur Blanc is allowing me to go in the kitchen to shoot some of the amazing food that Victoria and Matt have ordered!!!
I can smell the rosemary already.